Because there is so much involved with wetsuits and triathlon, I wanted to get some information from one of the leading triathlon wetsuit companies out there. Luckily, Liz Barlow, president of Xterra wetuits answered a few questions: 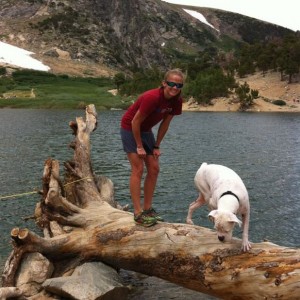 My interview with Liz Barlow of XTERRA Wetsuits

KEVIN: What’s your story, how did you become president of Xterra wetsuits?

LIZ: I started working for XTERRA Wetsuits in March of 2010 in customer service. Keith Simmons, founder of XTERRA Wetsuits, saw something in me (I’m not sure what) and promoted me to the CLT (customer service) manager within a few months of working with him. Over the past few years, I’ve slowly taken on more and more responsibilities. We moved the company to Denver, Colorado in 2011. When the company moved from Colorado to Texas towards the end of 2012, I stayed in Denver and pursued another job. I got a call from Keith in early 2013 offering me the opportunity to become the President back in San Diego. I officially started as President with XTERRA Wetsuits on March 1st after moving back to San Diego.

KEVIN: Let’s talk about Xterra and how it’s better than other suits. I want to learn about wetsuit technology!

LIZ: XTERRA Wetsuits is the only company in the industry that sells directly to triathletes, the end user. Since we
cut out several middlemen (distributors, retailers, etc.), we are able to spend more money on producing better
wetsuits and still offer a lower price to our customers. In terms of technology, we have exclusive rights to
the materials used in our new Vendetta Sleeveless Wetsuit (http://www.xterrawetsuits.com/store/index.php/
products/triathlon-wetsuits/vendetta-sleeveless-wetsuit). No other wetsuit company has the rights to materials
as buoyant as the neoprene (actually chloroprene) used in the Vendetta Sleeveless Wetsuit.

When it comes to wetsuit technology, you should be most interested in the impacts the materials of the suit have
on buoyancy, hydrodynamics/drag-reduction, and flexibility. We already discussed buoyancy with the Vendetta
Sleeveless; however, buoyancy really comes down to the quality of neoprene/chloroprene and thickness.
USAT and WTC have limited the thickness on wetsuits to 5mm to ensure that no one gains an additional edge
with a thicker suit, so it comes down to quality of materials if all suits are 5mm thick. As for hydrodynamics/
drag-reduction, that is related to the outer coating on a wetsuit. If the coating is slicker than your skin, then
you’ve successfully reduced your drag by just wearing a wetsuit; generally speaking, fullsuits have less drag
than sleeveless suits since they cover more of your body. With regards to flexibility, that’s determined by the
liner of the suit. XTERRA Wetsuits was the first company to use a four-way stretch liner in their suits; this
provides the utmost flexibility. With higher models in XTERRA Wetsuits’ lineup, you’re also getting additional
panels in the arms and shoulders to provide a more natural/anatomical fit which increases flexibility as well.

KEVIN: What can a wetsuit do for a weaker swimmer? Does it even the field a bit?

LIZ: The main advantage of a wetsuit is buoyancy which translates to speed; your body drags in the water when
it’s not properly positioned. A wetsuit lifts your body higher in the water, especially your lower half which
enables you to reduce the drag it creates and swim faster. Stronger swimmers prefer non-wetsuit swims
because wetsuits absolutely level the playing field and offer a bigger advantage for weaker swimmers relative to
stronger swimmers.

KEVIN: Sleeved vs. Sleeveless wetsuits, what’s your take? What about flexibility (I personally hate the “tight” feeling
sleeved suits give me)

LIZ: I used to recommend fullsuits over sleeveless suits until we introduced the Vendetta Sleeveless wetsuit. Most
people think they prefer a sleeveless suit because of the anticipated restriction; however, they’re pleasantly
surprised about the flexibility XTERRA Wetsuits offer. Generally speaking, stronger swimmers prefer
sleeveless wetsuits, but fullsuits provide additional buoyancy and reduced drag.

KEVIN: When does it pay off to not use a wetsuit in triathlon (besides when they are illegal!)?

LIZ: If a swim is wetsuit legal, there’s no reason not to wear a suit really. Any competitor wearing a wetsuit will
have an advantage over you until it comes time to take it off. Generally speaking, you can swim fast enough in
a wetsuit during a race to justify (offset) the time it takes you to remove it in T1, unless the swim is so incredibly
short (<300 m) that you don’t have long enough to make up time. Wetsuits also provide warmth – if it’s a
cold water swim, the additional warmth is a factor when it comes down to your ability to swim effectively and
efficiently. Save your energy for the bike and run!

LIZ: Chris Lieto is the fastest American pro triathlete, and he wears XTERRA Wetsuits. Jozsef Major, Christina
Jackson, and Radka Vodickova, Beth Shutt, and Jeff Paul are just a few other pros wearing our suits. We also
sponsor several age group athletes. From our owners to our employees, we’re outfitted with our products.

LIZ: People can buy our products at www.xterrawetsuits.com. Be sure to use the code CO-TRISC to earn
60% off select wetsuits and speedsuits. All of our pricing with that code can be found here: http://
www.xterrawetsuits.com/index.php/2012-CTC/. We offer a 30-day return/exchange program, so you can
actually swim in your suit and test it our prior to making a final purchase decision.

KEVIN: Plans this year for Xterra and you personally?

LIZ: XTERRA Wetsuits is going to continue to swim faster and set more PRs. We have a new team at our new headquarters in
San Diego, so we’re only going to get better and better as this year progresses. Already being the top triathlon wetsuit
seller, we plan to continue to improve our product line which will provide faster, more flexible suits to our triathletes and
open water swimmers. I’m about to start training for Ironman Lake Tahoe, so hopefully, I’ll be crossing the finish line at
the inaugural race in September this year!

Thanks for your time Liz!