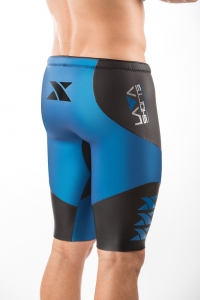 Last year, I had the pleasure of testing out Xterra’s new Lava pants–a capri wetsuit that went from the hips to about two inches below the knee.

These were designed to help your body position and give you a “wetsuit” feel and edge in the pool or in open water swims where the water temps were too warm for a full wetsuit.

While the Lava pants did exactly that, improving my times across the board, the capri pants had a tendency to bunch up around the knees and slip from the waist unless I cinched the waist cord.

Xterra now has come out with a brand new Lava short. Essentially, these are wetsuit jammers. Made out of the same neoprene material and thickness as their wetsuits, the shorts help your lower body float in the water and consequently, correct your bad body position. So will these make you faster? Definitely.

I performed three basic test–similar to what I did for the Lava pants–to see the effects on speed, endurance, and efficiency. To test speed, I swam 10×100 as fast as I possibly could with 1 min rest in between each rep. I swam these on separate Fridays so that I would come into both with the roughly the same amount of weekly, accumulated fatigue.

The warmup was the same for both workouts. For the “Speedo only” workout, I average 1:15 second per 100 with a standard deviation of 1 second; for the round with the Lava shorts, I averaged, 1:10 second/100 with a standard deviation of 1 second. Understandibly, my stroke count and calculated SWOLF score were both lower with the Lava shorts.

I was not able to get my splits on these workouts so cannot say how consistent they were; however, I felt much smoother wearing the shorts and that I recovered more quickly between reps.

Lastly, I wanted to test efficiency. This is trickier to measure because it is more subjective.

While you can measure SWOLF score and stroke rate, it does not really detail your rate of perceived exertion (RPE), so to test the effects of the Lava shorts on this, I measured how consistent my splits were over the course of a workout.

In the workouts where I wore the shorts, my splits differed only slightly between reps without the typical fade towards the end of the workout. I also got out of the pool feeling much more energized and feeling less drained than I typically would.

Overall and as shown by the numbers above, these shorts work.

If given the option in the pool, I think I would choose the shorts because there was no bunching or slippage and you do not look as dorky in the pool; I felt and looked like I was wearing a regular jammer. However, if I had an open water race or the heater in the pool broke so the water temperature was hovering in that weird zone of wetsuit legality where it is warm enough to make you overheat but still cold enough to give you a chill–I would most likely use the pants because they do provide some warmth compared to the shorts.

Like the pants though, I would not wear these every single practice as tempting as it may be. The shorts help with form but do not correct it.

While you may be faster with them on, you would be even faster with them on AND with better, natural form. The shorts help with form though in that they give you the feel for how proper form should be so when you take them off you can feel the difference and thus work on getting your body position to where it should be.

I would limit wearing them to between 25% and 50% of your swims and during the swims without the shorts practice proper body position and hip rotation.

Overall, Xterra has done an excellent job with these shorts and I highly recommend them. They will definitely become a staple of swim bag.

To pick up a pair at 60% off list price, use code CO-TRISC here: