If you’re watching the Olympic swimming, hopefully you are as blown away by some of the performances so far as I am. Some of the 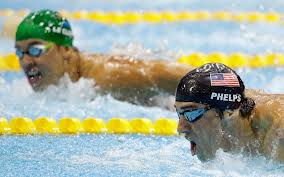 gold medal races have really left me in awe- The French 4×100 relay coming from behind to defeat the Americans, doing a very similar thing in reverse as to what happened in 2008 was unreal. Ryan Lochte’s 400 IM gold, Missy Franklin winning the 200 Free, then the 100 Back 10 minutes later, and Lee Shi-Wen not only shattering the 400 IM record, but finishing the free leg of the race even faster than Lochte!

There are so many individual stories of personal and Olympic triumph, I love it.

And I haven’t even gotten to Michael Phelps, who I want to discuss today.

Phelps of course has been everything-swimming for the past 8 years. And he came into this Olympics heavily favored in his events. And so far, he has swam pretty well, and yesterday become the most decorated athlete in Olympic history with a silver medal in the 4×200 relay and the 200 Butterfly.

There are all kinds of reasons that may be given as to what happened, why he slipped a bit. And maybe there’s validity to all of them. But I think the reason why it would be so difficult for anyone, including Superman Phelps, to repeat or improve upon his 08 performance comes down to one thing: The Why.

In 2008, Phelps set the record with 8 gold medals. He won everything, set world records, and walked away as probably the greatest Olympian of all time.

In the last year when he was training for this Olympics, we heard that this would be his last one. He was done at 27. Why would he declare his retirement before the games began?

It’s simple. It’s because of The Why.

What did he have left to prove? Why is he still swimming at this level?

On a much smaller level, it reminds me of something that happened in college when I was swimming for my school. In my first year, I was one of the only backstrokers on the team, and early in the season emerged as the #1 backstroker by posting the fastest time in one of the dual meets. Our first big meet was coming up in a couple weeks, against our rival school who we badly wanted to beat. I thought I was going to lead off the 4×100 Medley relay. My coach had other thoughts. He did not put me on the relay, and instead chose one of the older guys on the team who had “proven” himself the year before.

I was furious! And motivated. We had 1 meet left before the big one. It was a 90 minute drive away. I sat there in the van and could think of nothing more than absolutely crushing my 100 back time. Crushing it. That’s all I could envision. Everything in my mind was focused on making my coach WRONG for taking me out of the relay.

I crushed my best time, and earned myself a spot on the relay for the big meet.

And what happened at the big meet, I finally got my chance on the big stage?

I swam like shit. I wasn’t even close to the time I did to get there.

Why? I wanted to beat the guy on their relay, I really did. I wanted to go just as fast as I had in the meet before. But the incentive was just not as great. I had accomplished my goal of getting there already. I wanted to swim fast but the motivation wasn’t there like it was previously.

So we go back to The Why. Simon Sinek even wrote a book on this topic. It will make a big difference.

Phelps WANTED badly to beat the guy last night in the 200 fly. But do you think his “Why” was bigger in this Olympics or in 2008? Do you think the South African Chad le Clos who beat Phelps had a HUGE Why leading up to this race? Phelps has already been there, done that. He’s still an amazing athlete and capable of phenomenal performances (like in the 4×200 relay), but these little things like getting touched out at the finish, go back to the Why.

What is your Why?