As I stood on the start line, I was still in a state of shock. This was THE World Championships! The best in the world had congregated on this start line to see 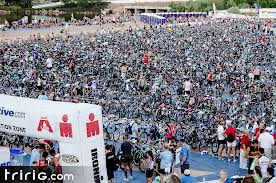 who was the best in our sport, and I was a part of it! Just thinking about this level of competition was both exhilarating and frightening. My mind churned worse than my stomach with a mixture of questions: Was I really supposed to be here? Everyone looks so much faster than I am. Would I be able to deliver today? Had I left my hotel key in the room? Had I done enough training? As soon as these questions arose though, I immediately answered them with a resounding “Yes!” I was meant to be here.

Not only had I put in significant amounts of training, logging hours in the pool, in the saddle, and on the roads, I had also earned my place to be here and qualified. I had proven myself in the past, and there was no reason to question that I was in any worse shape than I was in the past. In fact, I had was in better shape than I had been for past races. “Chris, you are ready for this, so BRING. IT. ON.” I placed one foot into Lake Las Vegas’ tepid water, and the 70.3 World Championships had begun.

I had flown to Las Vegas on Thursday on Southwest airlines from BWI. The trip out was a breeze especially on Southwest, which I think is the most triathlete friendly airlines. Not only did they have the cheapest fares, they also only charged me $50 each way for my over-sized bike box. Traveling out there a few days before the race was a wise choice since I knew that I would need to acclimate to the heat and the three hour time difference from my home in DC. While I thrive and have trained in the heat, I knew that Vegas heat was much drier and would be a completely different beast.

One benefit of racing in Vegas is that there are some very reasonably priced but lavish hotels, and my hotel, The Ravella, was no different. Although the hotel was not the host hotel and was away from downtown Henderson, where the expo, registration, and run finish was, the benefits of staying a short walk from the host hotel and right next to the swim start would pay off in not adding stress. Not being next to the expo was also beneficial since I would not be able not get caught up in all the pre-race hype and avoid dropping loads of money on gear that I did not need. The stress free Ravella environment was perfect.

On Saturday, I did my normal prerace triple: an easy swim in the water (thankfully, I was able to do the first and last section of the course), light ride on the course, and then an easy, easy run. On the run, I ran into my coach, Angela Naeth, who was also doing here pre race run, so we ran together chatting about our race plans and goals. Talking to her soothed my nerves significantly. I unloaded all my anxiety and worries on her as if she was Oprah. She just smiled and said “You are ready for sure. Just rock it.” If she thought I was ready, then I should think so as well. After checking in my bike, grabbing a quick dinner at the hotel dinning room, where I gorged on their healthy pre race buffet of quinoa, roasted squash, halibut, and flax oat bars, I hit the sack and fell asleep almost instantly.

All four of my alarms went off in order, but I did not need them. I had been up for 30 minutes prior, had made my breakfast blend coffee, and eaten my customary pre-race meal of oatmeal and whey powder. Thankfully, I did not have to worry about parking or getting to T1, so I just walked across the bridge, got tatted up, and dropped off the rest of my bike gear all before the crowds descended upon T1. Unfortunately, my wave was at 8, an hour and a half after the pros and the last wave to go off (typical; how the hell does WTC seed these waves?! But that is another blog), so I had a lot of standing around to do. I did a quick run to warm up and did some resistant band stretching to prime my arms. With 15 minutes to go, I took my caffeinated gel and lined up with the rest of the field. The butterflies in my stomach were as jittery as I was, but as the minutes ticked by they died off one by one. After 18 months of preparation, it was show time

The Swim:
As many of you know my swim is not the greatest in fact it is the slowest in the field. At least I recognize this, and had adapted my race plan to accommodate for my slower speed. I started the swim towards the back of the wave at a quick enough pace to keep with the main group. Instead of starting in the center or on the outside, I decided to hug the inside of the course, which allowed for better sighting and shaved off precious seconds. Unlike other races in which the “washing machine” calms after the first 200 as swimmers thin out, I seemed to always be with at least ten swimmers. Amazingly, at the turnaround I was still with the main group! Moreover, it felt easy and relaxed. Drafting off these swimmers was certainly helping. I emerged from the water in 35 minutes, which is not exceedingly fast but not as slow as I had done in Providence, which bolstered my spirits and propelled me on my 300 meter run into T1, up the steep, zig-zagging hill that lead out of transition, and onto the bike.

The Bike: 2:33
The Bike course at Vegas is surprisingly hilly and challenging. It is an out and back ride on almost perfect roads through Lake Mead Park. I knew I had to pace myself properly but it was hard because I knew I had to play catch up. I passed rider after rider with ease all the while keeping an even heart rate on both the up hills and down hills. The sun beat down on us as we pedaled through the gorgeous desert scenery, but I could not ease up to enjoy the scenery. I had to keep my foot on the accelerator but within reason. The desert wind blew across the rider and wiped the sweat off our faces. Although I did not want to, I forced myself to drink and drink knowing that I was losing more water than I knew. To limit my weight, I had only packed three water bottles, one in the front one on the frame, and one on my rear cage, but it was just enough to get me to each aide station. As we made our way down in Henderson proper, I eased up and switched into a higher gear to loosen up the legs and prep myself for the run to come.

The Run: 1:25
The run is my strongest leg but today I just did not have it. I started the three lap run course at a moderate 5:40 pace, but by the end of the first lap eased to a 6:15. By the third lap, I was drained and dropped to a 6:45-7. It might have been that I was dehydrated or that the aide stations were out of coke by the time I cruised by or the brutal heat with no shade, but my stomach was churning and I could not put out the consistent pacing that I had done at Providence. With 100 meters to go another age grouper sprinted past me; I tried my best to hold on but even the fumes that I had been running on had evaporated. I finished in proud 6th place in my age group, only 10 minutes behind the winner.

Considering I have only been competing for one and half years, I am thrilled with how I performed. These were some of the best in the world, and I raced with them. While I may not be champion, I at least know now that I can give them a run for their energy gels. Needless to say, this was a great end of the season and a taste of many more races and hopefully championships to come. Now, however, it’s time to hit the pool.