I loved this article because this guy is kind of one of those everyday guys who’s looking to get fit by participating in a triathlon. There’s also a lot of triathlon metaphors to life here, I especially loved this quote:

“When you are moving through transition, just keep moving. It doesn’t matter how slow you’re going, as long as you’re moving forward.” 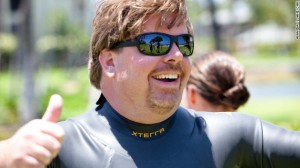 To me, April wasn’t just talking about triathlon. She was talking about my life. When she said that, I realized I had spent quite a bit of recent time in transition. Time frozen, not moving forward. Waiting for something to happen so I could react to it.

Good luck to Jeff and everyone making positive changes to their lives!

Get up, get moving and get to what’s next

Jeff Dauler, a radio host from Atlanta, Georgia, is one of seven CNN viewers selected to be a part of the Fit Nation Triathlon Challenge program. In the week leading up to the Nautica Malibu Triathlon, each of the “Lucky 7” will share his or her thoughts on the journey.

About halfway through our training trip to Kona, Hawaii, all the athletes were called to one of the CNN staff rooms at the resort. There was a surprise waiting for us; the Fit Nation organizers LOVE surprises.

In that room, we were all handed packages that contained our official race uniforms. In the triathlon world, it is called a “kit.” It’s shorts and a tank top that you wear during all three sports: under your wetsuit in the swim, on the bike and during the run.

But I didn’t have a choice. The CNN producers really wanted us in that gear for photo purposes, and the rest of the team was enthusiastic about getting them on. So, the next day, I would be wearing a skin-tight outfit as I rode my bike from our resort into Kona … about a three-hour Spandexed adventure. Awesome.

Add humility to the list of unexpected lessons learned during triathlon.

I’ve also learned to appreciate. I appreciate the support of others as family, friends and radio fans have been relentless in their encouragement of my journey. I appreciate my own accomplishments as I enjoy longer and faster and easier runs and rides each week. And I appreciate the simple fact that my health currently allows me to participate in the program.

But the lesson that will really change my life came from my coach, April. She was talking us through the different ways to approach transition, the periods of time when you move between the three sports of triathlon. April likes to spend as little time as possible in transition – her husband Ken is a bit more relaxed and zen about it.

Both are perfectly acceptable ways to move from swim to bike and bike to run, you just have to decide what works for you and what your goals are. There is only one rule of transition, April said:

“When you are moving through transition, just keep moving. It doesn’t matter how slow you’re going, as long as you’re moving forward.”

To me, April wasn’t just talking about triathlon. She was talking about my life. When she said that, I realized I had spent quite a bit of recent time in transition. Time frozen, not moving forward. Waiting for something to happen so I could react to it.

I was at a critical point in my world, and instead of pushing forward, I sat quietly. I realized I did that with major life changes and also with simple, day-to-day things. I stopped. Froze up. Became a bystander.

It seems to go against what’s natural: When you finish a big part of any journey, you’re tired so you rest. And that was my excuse. Life tired me out, so I took a break to rest.

But when you do that, you never get out of transition. You get stuck there, between two parts of whatever race you’re running. And until you get up and start moving forward … even slowly … you’ll sit there, watching all the other riders hop off their bikes, put on their running shoes, finish the race, go to the after-party, have a great night’s sleep, and then start thinking about their next adventure.

You’re sitting there, sipping on your water, staring at your feet, watching everything pass by. Everything moves on. But you.

Get up. Get moving. Get through transition and get on with what’s next. If you’re tired … get up slowly, get moving slowly. But move. Go.

That lesson will stay with me forever.

The things I’ve learned about myself are the prizes for this race. I can worry about my time on the next one, or the one after that. I told everyone that if I had one triathlon in me, then I was done. But that’s not the case.

What’s the point in just doing one and then never seeing if you can improve that time? I’ve already got my eye on two other races (maybe three!) before the end of this year. Crazy, right? My Lucky 7 teammate Nancy even asked me about a half-Ironman next year!

One thought on “Triathlon advice: Get up get moving to what’s next”