Over the weekend, the world’s best competed in Chattanooga at the 70.3 world championships. From all reports, the course was definitely championship quality with a partially against current swim, plenty of climbing, and an undulating run. Athletes had their training cut out for them.

The up river swim in particular got me thinking about how one could best prepare for such races. Most swims are in lakes which rarely have currents or are downstream (i.e. Augusta 70.3). But there are races where race directors like to challenge athletes and include against current segments either in oceans or in rivers.

Since athletes should prepare for the conditions of their “A” race by trying to simulate as much of the course as possible. They should include swim sessions that prepare them for such conditions. However, finding a strong current/stream/ocean venue becomes a challenge. But with a few tips, there are ways to simulate the physical and mental demands of tough currents.

The best way, I have found is using a swim ergometer like the Vasa Swim Erg. With seven different power levels, you can jack up the resistance to make it feel like you are swimming into rapids. an As an added bonus, you don’t have to worry about flip turns. And you are swimming continuously with constant resistance.

In the pool, you can simulate a current with a towel or a swim parachute. Simply wrap the towel around your ankles, leaving a tail that long enough to drag behind you. Or affix the parachute to your ankles and swim! If you are new to this, it helps to first use a buoy or use Lava pants to help with your balance in the water.

Start with shorter sets of 50 m until you are used to the resistance.  Then build up to sets of 500 m plus. You will want to put these sets where they would occur in the race. So if you start into the current, do them first.

Please note that including such sets should be reserved for intermediate to advanced swimmers who have good form. If you are a beginner, and your race has strong currents or chop, then fixing your form and smoothing out efficiencies should be your number one priority.

Even if your race does not have a current, including such sets will challenge your form and build strength. So play around with it this off season. 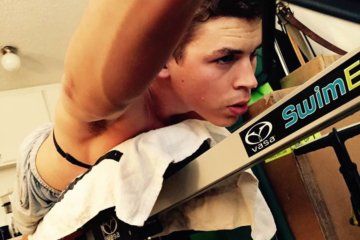 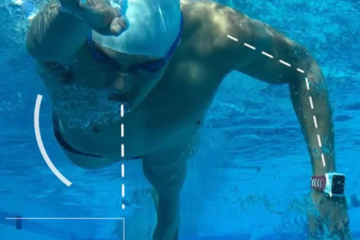 What you need to know about the recovery phase