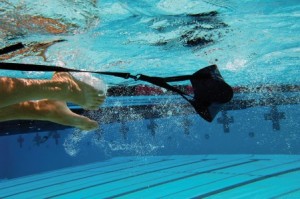 Continuing on with odd American customs, the moment that Hallowen ends, an even weirder American tradition begins. In an effort to raise awareness for prostate cancer, men refrain from shaving for the entire month of November; hence it has been called, “No Shave November” or “Movember.” Women too participate in the “festivities” by not shaving their legs or arms. Yeah, American customs are weird, but what does this have to do with swimming? Actually a lot.

Many swimmers and triathletes also do not shave for a month or more before championships races. Why? Partially it is superstition, but some believe that it also affects performance if it be ever so slightly. According to my college swim team captain, who made us participate in the lead up to championships, hair creates drag which then causes you to slow down. Your body gets used to this drag and develops more muscles to keep the speed the same.  When you shave, the drag disappears but your improved strength does not. While I do not believe entirely that shaving your legs really builds more muscles, I do believe in creating drag to improve strength and power.

By wearing a swim parachute, a drag suit (essentially a second swimsuit), or even a pair of regular tights,  you increase your drag in the water. In the last two months before a race when I have entered into my build/peak phase, I like to include some “speed-drag” sets where I will do 5 sets of anywhere from 200-500m, 4 with a drag suit at race effort then take the suit off for the last set.

If you are new to swimming and not confident in your form, I would use these tools sparingly, but if you are fairly advanced and need an extra edge, adding drag can help significantly.