With northern hemisphere’s race season officially underway, I have been seeing a lot of posts from triathletes on how they were surprised at how slow their swim split was in their first race.

“I swam so much over the winter and only took 2 min off my time….”
“I swim so fast in the pool but nothing has changed when I get to a race…”
“Why am I so slow in the water?! WTF? I swim 5 times a week during the off season…”

I am sure some of you can relate because it is a very common complaint.

If you are about to race or are in the group of triathletes who has experienced this disparity in swim times, read on. So that you close the gap between your OWS times and your pool times and finally start seeing even faster swim splits in races:

First off, let’s identify where people lose the most time when switching to open water:

The number one remedy to the majority if not all of the above, is……

Practice outside as much as you can (but not too much)!

I know, I know: It is hard to get to open water because of schedules, weather conditions (it’s still pretty cold here in Canada too), and other commitments. So continue to swim 3-4 times a week. But as the race approaches take one or two of those swims and do it in open water. Make it as high a priority as possible. Swimming in the pool is completely different from swimming in the open water. So to get faster at the latter, you need to do it more. And not just on race day.

Use these swims to test your wetsuit, practice sighting, get used to not seeing the bottom, and practice with others. Also work on longer intervals at race pace. For those of you have done open water swims before, you know how much flip turns or turns in the pool make a difference. Without them, you tire out much more quickly.

Swimming in the pool still has its place. Even though you race in the open water, you should still keep up your 3- and 4- time weekly pool workouts, especially if your form is still weak. Pool swims are important to develop speed and perfect technique without the distractions that open water provides. Use the pool to focus on your form and drill work as well as a few over race pace speed sets for time so that you can monitor your splits.

If open water is simply out of the question, simulate the chop, surf, and congestion by trying to swim in a lane with three to four other people at the same time. It is tough but it will mimic that race start well. Also, close your eyes while swimming to mimic losing your ability to guide yourself with the black line. Flipping at the flags is also a great way to simulate the stop go of open water swimming, and not resting between lengths.

So to close the gap between your open water swim times and your newly found faster pool times, get out in the open water and practice! The deficit will close, I promise. 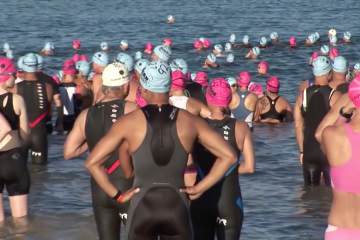 Why your pool times don’t match your OWS times