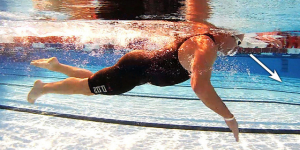 One of the biggest sources of frustration for beginner swimmers and coincidentally the most common form error next to crossing over is sinking legs. It has been a while since we have addressed this and since we have received so many questions like “why do i sink when i swim”, “why my legs sink when i try to float or swim backstroke” and more, we thought we would revisit the topic.

In an ideal swim stroke like those seen in YouTube videos of the Olympics and Collegiate Nationals, swimmers’ bodies are parallel to the surface of the water; their butts skim the surface and their ankles come slightly out of the water as they kick, propelling them forward like fins.

On the other hand, a swimmer with sinking legs looks like they are swimming uphill. Starting at the hips, their whole lower body drags underneath the water and in extreme cases practically scrape the bottom of the pool. With such form, drag and thus effort and energy increases which in turn causes problems with breathing and pulling.

The causes of sinking legs are multifaceted including

Obviously, with so many causes it is hard to have just one solution, so instead here is a simple progression to improve all of these causes and improve your entire stroke.

You might be tempted to use a pull buoy or Lava pants to help with the situation but be aware that this is a serious Band-aid and not the solution. Use them sparingly for the main set of workouts as you do the above progress but not in place of it.