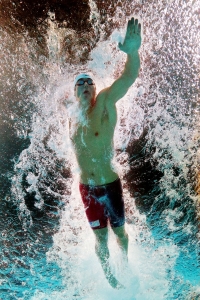 Although power meters were first introduced in 1989, over the past 10 years, they have crept into cycling and triathlon training and become the gold standard of metrics.

Training with power has the power to transform your training and set new PRs in endurances races.

Monitoring watts and training in specific zones prevents burn out, bonking, and overtraining.

You can apply just the right amount of stress and not a watts more. Unlike heart rate it is objective. 200 watts is the same 200 watts to me and you. It might be easier for me to hold because I am heavier and/or weigh more but it is still 200 watts. It also is instantaneous.

With heart rate, there is usually a 1-2 minute lag between when you start your effort and when your heart rate reflects that effort.      More recently, power has begun to creep into the running world. A nifty device called “Stryd” successfully launched a kickstarter campaign and is in production.

Stryd  is a small pod that looks like a heart rate monitor and can measure power while you run using metrics and a complex algorithm. One benefit of power over HR in running is that you will be able to normalize your effort between courses.

Theoretically, if you are on a hilly, windy trail course which is more challenging than a track 5k, then you can run to a specific wattage to prevent fatigue and bonking. In an endurance triathlon race also, you could “set” a wattage range that you know you can hold and thus do not have to use HR data which could be influenced in by dehydration, hills, bike fatigue etc.

In training it is feasible to track how fit you are running off the bike with a relatively object metric. Over the course of your training if you are able to run at a higher power off the bike then you are getting fitter. Whether this catches on or coaches adapt this successfully into training programs remains to be seen.      Is power in the pool the next step?

Even though I am a huge data geek and get excited at the thought, I am first to admit that this would be very hard to do at least in water.

For one, the device would be hard to create because there is nowhere to put strain gauge. There has been rumors of a power meter connected to a paddle but even then it would be tough to validate.

Then you have the issue of how to send that data because sending through water has always been an issue unless you record then send like many heart rate monitors do these days. There is a solution though by using an ergometer like the Vasa Swim Erg, which is on land and thus has a strain gauge built into the main, resistance unit in addition to being ANT+ compatible and thus sends your numbers directly to your Garmin watch or head unit. I personally have been playing with the numbers with interesting success but is a different metric from how I use it on the bike. For one, power allows me to track my swim fitness differently than just watching my splits in the pool.

In addition to being able to watch my splits go down, I can track my power go up on both TT tests and in workouts. Like on the bike the numbers swing widely so it is not like I can hold a specific number like I can on the Kickr.

However, I can look at power trends over time. If I am doing a 400m set for example, I can see if my power fades over the course of the interval. Can’t I do this with just pace? In a way I can, but my pace does not reflect my form like when I pair the numbers with power. If my power is high and my pace is the same, I know my form is breaking down and my inefficiency is climbing.

On the flip side, if I am going at the same pace, but my power is lower, I am becoming more efficient.      More importantly, power on the Vasa also allows me to monitor form better. I have noticed that when my elbow drops and I pull with my shoulder rather than my core and back, my power also drops by a good 15 watts.

This makes sense because compared to my lats and back, my shoulder muscles are not as strong. Using power has its limitations and will never replace quality time in the pool, but it does have significant benefits as a training tool and supplement to pool workouts.

If you are interested in picking up a Vasa Swim ERG, you can get $50 off by using discount code TRISWIMCOACH here:

Let us know what you think about swimming power in the comments below!