I don’t always swim at Black Rock on Sunday’s, it’s on the eastern side of Melbourne, about 25 km from where I live, but it gives me a good excuse to get on my bike for the morning and as with meet up swims I have previously been to, the casual and friendly atmosphere is always welcome.

Although it’s early January it is a windy and cool day for the middle of summer, with the southerly wind churning up an uncomfortable half metre chop, which will mean a few mouthfuls of seawater through the swim, but nothing I haven’t handled before.

As I get my wetsuit on I’m chatting with another swimmer noticing that he looks uneasy and reluctant to be there. It’s his first open water swim. I try to get him talking as much as possible to get his mind off the swim, I know he’ll be fine, especially with the group but can relate to what might be going on in his head.

My history with open water swimming starts back in 2008. At the time I was living in Adelaide. Always the runner, I decided that I wanted to start to compete in multisport events so I saw an Aquathlon (triathlon minus the bike leg) as being my first natural step. Summers are long and hot in Adelaide, so I would run 4kms to the beach, swim for about 400m and then run back home.

My confidence in open water was low, especially when I was alone. I was uneasy with deep water and I was still sorting out my swim technique, so I would wade out in only half a metre of water, hoping that I would be safe from any trouble and the “Shark Patrol” flying overhead would warn me of any lurking danger. (http://www.adelaidenow.com.au/news/south-australia/unisas-shark-patrol-working-to-spot-sharks-off-adelaides-beaches-this-summer/story-e6frea83-1226563799029)

When I eventually got to a race it was clear that my wading swims were not helping. The start of the swim would be followed by a panic attack.

My initial enthusiasm running into the water would soon end the moment I was confronted with other swimmers around me, cold, deep, choppy water and by the time I got to the first buoy I would be breast stroking, questioning why I was putting myself through this. My hope was that as long as I continued to train hard in the pool it would filter through to my open water swimming. After a long break from the open water and back living in Melbourne, my extra efforts in the pool had no effect on my anxiety when it came to the open water.

It was clear that the only way I was going to improve was to regularly swim in open water. By chance I bumped into a group encouraging safe and friendly open water swimming, trying to leave any competitive aspects on the beach (http://www.meetup.com/Melbourne-Ocean-Swimming/). It was the chance meeting that I was grateful for, but it was a long road making a commitment to swim with the group every week, even through winter.

By the time spring came I found myself getting use to the ever-changing conditions of the open water. The deeper water was no longer an obstacle and swimming weekly prepared me for almost anything that I would come across in a race.

The group swims got me used to swimming with others around me and swimming through the winter gave me the consistency that I was lacking during that time of the year. It has been three years since I started swimming with the group and if someone asks me, what is the one thing you can do to improve your open water swimming, I would simply tell them to go swim in open water. 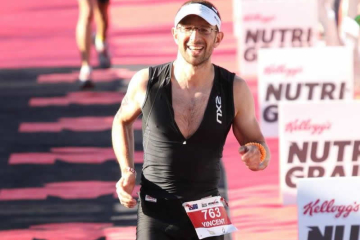 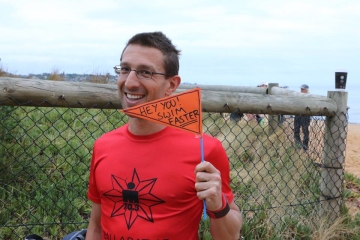