If you are in the Northern Hemisphere like I am, clocks are about to change, days will get shorter, and the weather is cooling off as we head into the “off
season” for triathlons.

Many things may happen in the off season. You can lose motivation, get fat, or lose track of your goals. However, if you go into it with a plan, you can actually improve your overall health and fitness level, without having to train as much!

This is the perfect time to not only concentrate on your weakest leg of the race, but work on getting your body healthy, and staying that way! I have included an article from Alex at Active.com on some off-season ideas, and a reminder about my special offer to get The Healthy Burn AND The Complete Guide to Triathlon Swimming at a low price!

Fitness Makeover: What to Do in the Offseason

September’s Fitness Makeover will look at Craig Hanken, a 35-year-old resident of Des Moines who just caught the triathlon bug this year. Having competed in three sprint and one Olympic-distance triathlon this year, Craig has seen his times improve consistently and is considering the Wisconsin or Florida Ironman races next year.

His question: What can he do to maintain his hard-won level of conditioning during the snow-bound Iowa winter months? Craig is admittedly “terrified” of what to do during the off-season, cringing at the thought of life without the daily outdoor training he has become accustomed to this summer. Granted, the winter doldrums hit all of us – even those fortunate enough to live in warmer climates when daylight-savings hours take effect. While the first few weeks of winter are always a culture shock, be it with the arrival of snow or the seemingly premature darkness that cuts into customary outdoor training time, there’s no need to panic and revert to the couch for a few months of hibernation.

There are several ways to maintain and even improve your athletic abilities during the off-season, and those athletes that do will be surprised to find themselves way ahead of the pack come next spring.

In some ways Craig has already answered his own question with the list of goals he has provided me in his “Makeover” request: In addition to attempting an Ironman next year, he’d like to gain more upper-body muscle mass and drop his sprint-distance tri time to under the 1:10 barrier. Therefore, it follows that over the course of the next six months he should refocus some of his allotted training time to some light weight training and speed work.

Given the impending snowfall and lack of outdoor training time, Craig should commit to three days a week in the gym to work on his strength training. He should consult a personal trainer for advice in building a regimen that increases strength but not necessarily muscle mass (preferably a trainer with background knowledge in triathlon).

Hitting the weight room three times a week will allow him to increase his strength while not sacrificing too much valuable cardiovascular training time. Also, by lifting every other day, he prevents himself from “overdoing” it, allowing his body to recover on the days off and ensuring that he won’t unexpectedly “bulk up.”

Although Craig writes that he would like to do just that -“bulk up” by gaining more upper-body mass – he should reconsider that goal if he is planning on entering an Ironman next year.

Most triathletes have muscular legs but a leaner upper body since the bulk of their event relies on the legs, and extra weight in the shoulders and arms can cause more harm than good. While upper-body strength is important for swimming, unnecessary muscle mass can cause the body to ride lower in the water, slowing the swimmer down. In running, increased upper body weight can result in injury, especially if the distances being run are of marathon proportions as they are in the Ironman The winter months are also a great time to perfect one’s weaknesses. Craig should ask himself which of his three sports needs the most work.

For many people, of course, that sport is swimming. There is no better time than the off-season for triathletes to buckle down and force themselves to figure out proper stroke technique, or join a masters team for renewed motivation, or even hire a personal swim coach for one-on-one instruction.

There are indoor pools everywhere (Iowa being no exception), and Craig would be advised to make the most of his surrounding limitations and increase his pool workouts by once a week (at least).

Contrary to popular belief, the easiest improvements to make in triathlon are through swimming. Most triathletes would not complain if they swam faster, but even those who consider themselves strong swimmers could benefit from better conditioning – the easier it is for them to get through their swim, the more energy and endurance they will have left for their bike and run.

Running outdoors is difficult in the winter months, though not impossible. Having grown up on the East Coast I am all too familiar with December jogs and slipping on the ice. However it can be invigorating under good conditions and should not be completely discounted. As long as there are roads and sidewalks that have been shoveled clean, it’s possible for Craig to get outside and enjoy the fresh air as long as he knows what he is running on. Sometimes ice sticks around for weeks, and sometimes after a snowfall it doesn’t even form. If you get the urge to run, use caution and stick to roads and sidewalks that look wet, not covered in snow that could be hiding ice underneath.

Personally I dislike running on a treadmill, but elite athletes I know swear by it as a convenient and controlled alternative to running outdoors. Remember that your body creates wind resistance while running outside, so it will feel easier running on a “flat” treadmill. To mimic a “flat” outdoor terrain while on a conveyor belt, it is recommended that you lift the machine one “grade” up from flat (so that you are running uphill on the machine, ever so slightly).
This ensures a more accurate workout to match an outdoor “flat” course. Treadmills also allow you to work on “pace,” as many athletes could afford to have a better understanding of their internal body clocks and physical capabilities. By setting the treadmill to varying speeds, you can coach your body to “feel” 8-minute miles, 7-minute miles, 6-minute miles, the more of a sense of “pace” you develop the better ability you will have to pace yourself for a marathon (or in Craig’s case, an Ironman).

Of course, spinning classes are all the rage these days and advanced classes can benefit even the strongest cyclists (just set your gears to a harder resistance). More importantly, classes offer a fun way to train to music while receiving constant encouragement (both from the instructor and from your neighboring cyclists).

Wearing a heart monitor during spin classes is a great way to gauge whether or not you are training at peak “threshold” aerobic levels (all that sensory overload can result in a fun class but sometimes less-than-focused training).

Craig should also remember that even though his goals involve triathlon, there are other sports that he can explore in the off months that might crossover to help his conditioning. I have suggested yoga before as a way of staying limber and flexible; a common problem, especially among novice triathletes like Craig, is a loss of flexibility as they get serious about their training and neglect simple stretching exercises.This loss of flexibility is directly responsible for the cramping I hear about from readers who wonder why they always succumb to muscle spasms in the early throes of a race. Check out part 2 of the worst case scenarios series for a look at what can cause cramping.

Indoor rock-climbing gyms are a fast-growing industry, and having tried it before I am convinced that it?s a great way to increase upper-body strength (as Craig desires) without developing injuries or unwanted bulk. The controlled strength needed in basic beginner’s rock climbing is exactly the strength required in the back, shoulders, and lateral muscles that swimmers rely on for long-distance swimming, when their triceps give out.

Craig need not be “terrified” about the upcoming months. Having been bitten by the triathlon bug this summer he can certainly fill his (shorter) winter days with sports activities that can make him a better athlete next spring. The trick is to identify his areas of weakness and perfect them while
avoiding injury.

A well-rounded program that includes an even mix of weight training, his chosen three sports, and perhaps a few new activities will make the winter go by in lightning speed, preparing him for next year’s ultimate challenge, the Ironman. 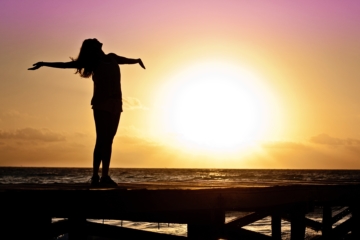