I’m so happy about this and can’t wait! Lance is going to compete in this 70.3 race in San Diego, my home town. This should be an exciting race to follow, as it will indicate what his future in the sport of triathlon might be. Also, I will venture a guess that other race directors may start trying to lure him to enter their races after the kind of PR the Superfrog is 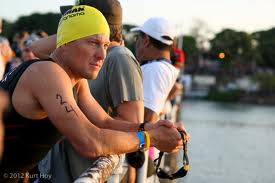 going to get here.

“Twenty-three days to go and less than 100 slots available. Did we mention Lance Armstrong will be racing……?”, organizers posted to the Superfrog Facebook page late Thursday.

The race, on Silver Strand State Beach and the adjacent highway, includes a 1.2-mile swim, a 56-mile bicycle ride and a 13.1-mile run. Armstrong has competed in Ironman and other triathlons since he retired from cycling last year.

Armstrong gained fame as a 7-time winner of the prestigious Tour de France and infamy last month when the U.S. Anti-Doping Agency stripped him of his titles and banned him from the sport.

The agency has long been in pursuit of Armstrong, and accusations that he used performance-enhancing drugs to achieve his success have dogged him throughout his career. The loss of his titles came about because Armstrong abandoned his legal challenge to the agency’s investigation.

He maintains his innocence, though other cyclists have accused him of doping. Just last week, Armstrong, at an anti-cancer conference, introduced himself as the winner of the Tour de France, reported the Associated Press.

Armstrong used his athletic career to benefit cancer research, launching a charity, Livestrong, which became widely recognized because of the ubiquitous yellow bracelets that served as a fundraiser for the cause.

Before his biggest athletic success, Armstrong almost succumbed to cancer.