Last weekend I traveled up north to race the Amica Providence 70.3 half Ironman race. While it was in the smallest state in the union, this was to be my biggest race of the season. Since I failed at Eagleman to qualify for the 70.3 World Championships in Las Vegas, this was my last shot to do so; I, therefore, came into the race with high hopes and even higher expectations.

The race expo occurred at the Dunkin Donuts Convention (unfortunately they had neither coffee nor doughnuts available; America may run on Duncan, but I swim/bike/ and run on it).

While I stayed with relatives in Watch Hill, there are many nice hotels in Providence that are within waking distance of both the expo, the finish line, and Providence’s scenic, charming down town and river front. Moreover, Amtrak runs
straight into the center of the city, which makes it an easy trip for those who prefer the train. The expo was
nothing special but did have a Bonk Breaker Bar tent handing out free samples. 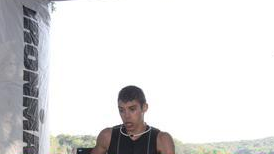 It was so tempting to put on different race outfits and get a taste of each one! My favorite though was the Honey and Almond butter. The race schwag was just as cool. Inside an Ironman Providence sling bag, they put a portable smoothie bottle (the
ones that you see weight lifters using to mix supplements) and a few Pure bars. As always the volunteers were wonderful, making check in a breeze. The race is a two transition race, meaning T1 is at the lake where we swim and T2 is in Providence. I therefore had to plan ahead and check in my run bag the day before with my running flats (I raced the Newton MV2s this year instead of my clunky trainers), fuel belt, and visor, before heading outside the city, where the swim and T1 takes place.

The race begins at Lincoln Park, which is 20 minutes North of the Providence; unlike last year,
parking was available right across the street at the new, Twin River Casino, which made transportation much
easier for those who you do not want to take the race day shuttle that they offered from downtown. The swim
takes place in a placid and scenic lake in the enter of the park. While water temperatures usually average in the
mid 70s, this year it was well above 80 making wetsuits illegal for age groupers like myself gunning for a
Vegas slot. I therefore decided to race in my De Soto Lift Foil speedsuit.

The Swim – Knowing my weak swim, I needed all the help I could get. The suit fits like a regular one piece tri suit, but still offers a fair amount of buoyancy compared to Blue Seventy’s and TYR’s speed suit. The pro’s started exactly at 6am with the pro women
following right after them. Like clockwork, wave after wave lined up on the beach and then sprinted into the calm water turning its mirror like surface into a white-capped sea. Unlike other races this is not an in-water start, so racers have to position themselves on the beach. Although I was in the last wave, I fortunately could warm-up in a small looped off area next to the start. When my wave was right about to start, I hoped out of the water and lined up with my fellow age groupers, a stacked field consisting of some of the best in the New England area as well as a few international racers. Then, at 7:45 exactly the horn went off, and all 50 of us sprinted into the wake. After a few butterfly kicks into the surf, I worked my way to the front of the pack, where I remained for the first 800 meters. Then, unforeseen disaster struck, and I began to tense up. I do not know why it happened but it did. My stroke shortened, and I soon dropped off the lead and fell to the back. I emerged from the water after 40 minutes to be greeted by a near empty transition area. All hope of qualify for
Vegas vanished as I ran out of transition. Even a podium place seemed very far off. I knew I had some serious
catch up to do.

The Bike – I had raced this race last year, so I knew that the bike course was a tough ride with a few steep climbs and several rollers. Moreover, the condition of the roads is terrible with lots of potholes and gravel. Although
better than last year, I still had to focus to avoid getting a flat. I sped along the scenic roads not paying attention to 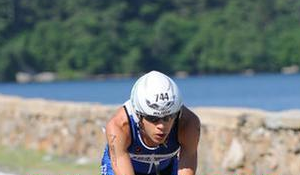 the great scenes and only focused catching the next person in my division. Keeping my power steady throughout the ride was crucial to prevent early burn out. Steady on the ups and just as fast on the downs. While the first 40 miles occur outside the city and on relatively calm roads, the last six miles occur in the city. With numerous sharp turns, railroad crossings, city traffic, and gravel, I had to slow down, which cost me about 4 minutes overall. I finished the ride in 2:35, which is what I did last year. I had caught several people in my age group but I still was far off from the podium.

The Run – As I ran out of T2, I saw a girl cheering; she wore a shirt with “What happens in Vegas stays in Vegas” printed across the chest. “It’s go time” I told myself, and I took off with vengeance. The run is a difficult 2
lap course that is just as challenging as the bike. After a flat 1 mile, it climbs for a mile and a quarter before 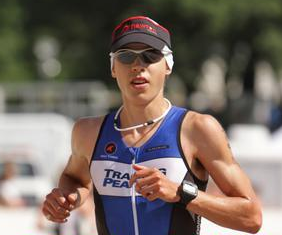 turning you around and making you retrace your steps back to the river front, which is flat but offers little
shade. When My Garmin buzzed to signal the first mile I glanced down. It read “5:40.” I can do this I told
myself and I began the grueling climb up the hill. I cranked off mile after mile at just under 6 min. pace. But
the heat eventually got to me so I had to drop the pace a tad and take water at each station with an occasional
cookie. With a 5k to go I finally caught the third place person. I knew I had to begin my kick early. Using
the down hills and the flats to my advantage I picked it up and drained all energy tanks. Finally, I crossed the
finished line with a final time of 4:36:37. Having gone from the bottom of the division to second, I missed first
place by just over 2 minutes.

Lesson learned – While the swim is important in triathlons, it is only one leg of three. Regardless of your position after the swim, it’s not over till its over.