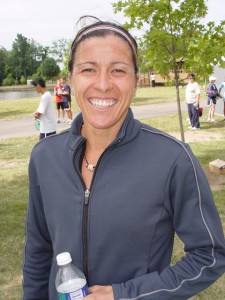 Welcome to the triswimcoach podcast. This is episode number 30 and this is Kevin and I am super stoked to bring you the interview that I have coming up after this little intro with Sheila Tormino. I met her a few weeks back and I did a blog post and kind of let people know what’s going on. I’m adapting some of her technique, some of her methodology into the tri-swim coach teaching and I think it is really good stuff and as I said in the interview, this is kind of the next level to swimming and the next step and I think we are kind of progressing past what we’ve learned already about swim technique and adding to it and learning how to go even faster or just going faster. I am able to succeed in preparing for a tri-athlon swim and getting through it, finishing middle of the pack, finishing with a lot of energy left over for the rest of their race but some people are getting faster has been a bit of a challenge, but I think this, what Sheila is talking about has definitely, is definitely going to help a lot of people, so stay tuned for that.

One other thing, I’ve been swimming in a lake here locally in Austin and they actually have buoys set up so you can track how far you’ve gone. A full lap around the buoys is 800 yards and the cool thing is I discovered an exercise, a dry land exercise during the swim. They have platforms on each of the buoys, they’re just kind of this wooden platform, so every time I go by a buoy I do a few of those deck ups so you basically pull yourself out of the water all the way and you extend your arms and what that does is it actually kind of gets you used to using the right kind of pull. The way you pull yourself out of the water is similar to how you pull in freestyle so you’re going to pull back. I like doing that exercise and I know most people don’t have a set up like this that is so good for learning or perfecting your stroke technique, but even just doing them in the pool, you do a few lengths and then you do a few deck ups, sets like that, are really good, but don’t do too many at first because you can get really sore and possibly hurt your shoulders if you are not used to them so just start out with a few and then go from there. But if you do have access to something like I do here, I would recommend just going around the circle and doing three, four, five when you stop and then you can get in your yardage and then do another lap without doing anything else, but I think this is a good way to hone in on your stroke technique.

I think that’s about it. If you are not a subscriber to the newsletter, you can get on that newsletter by going on to triswimlessons.com and we’re offering five free swim lessons online with a newsletter subscription. It’s a good way to get started in stroke technique improvement and also get all the announcements from tri-swim coach swim clinics that we are going to have coming up here starting up in probably, probably in January we are going to have our first one, so I’m really excited about that. I have not done any national level swim clinics to this point. I have done some local ones in San Diego but we are bringing it out and offering it to everyone now and I’ll have more on that later, kind of look to January as the first one and we’ll have more details out to you soon if you sign up for the newsletter.

So, without further ado, here is the interview with Sheila. Enjoy and have a great week of training.

Kevin: Okay, I am really excited to have Sheila Toremino on the show and at just over five feet two inches tall, and not having made her first Olympic team until the age of 27, Sheila Toremino seems like an unlikely candidate to have competed at four consecutive summer Olympiads in three different sports. With her eyes set on the possibilities of 1996, she trained before and after work with her small home town swim team in Nevonia, Michigan. Sheila grew to be an Olympic champion in one sport, world champion in a second sport, and the world-cup standing leader in a third sport. Sheila has experienced six completely different disciplines on the Olympic stage: swimming, cycling, running, skeet shooting, fencing, and equestrian show jumping. Her perception on the Olympics human potential and performance is unparalleled. At present, Sheila travels as a motivational speaker for schools, businesses, and community organizations. She volunteers extensively throughout her community and is partnered with two national non-profit organizations to support their mission. She also conducts swimming clinics worldwide and is the author of Called to Suits a book on free styling which came out this summer. It is available on her website Sheilat.com. Sheila welcome to the show.