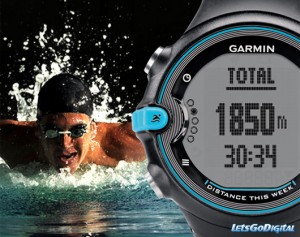 Let’s be honest: no one wants to be that guy who shows up to a group ride on a tri bike, a track workout with a camel back, or a multi-sport watch to masters. Besides being really dorky looking, it can disrupt the flow of the lane when one person is going off his or her Garmin for splits instead of the pace clock.

However, being the TrainingPeaks addict and data geek that I am, I really like looking at my swim data and find it helpful to analyze (as does my coach). Moreover, especially for really long sets, its hard for me to remember what splits I hit exactly or how far I went, which is why I started using the Garmin Swim a few month ago.

The Garmin Swim is essentially the 910 without the bike, run, or outdoor swim capabilities. It looks just like a normal Timex wrist watch on the outside but has built in accelerometer similar to that in the Garmin 910, 920, and your Smart phone, to accurately track your laps without calling attention to yourself. Even for my slender wrist it did not look bulky or clunky.

The watch also acts like a normal watch and tells you the time and date as default. At the bottom of the time you can also get your weekly swim yardage, which can give you a nice motivational boost some mornings. Also like other watches, the Swim uses a watch battery instead of a rechargeable one. To cut down on battery usage therefore, the watch will go to sleep after a minute of motionless.

To switch to swim mode, simply push the blue button on the left, make sure your pool length is set to the correct measurement (which you can change in the setting tab on the main menu), and hit the start button on the opposite side. Once you finish a lap hit the pause button (similar to the lap button on the 910), and the watch will record your split. If you find that this is too much of a hassle in practice or when swimming with others, you can alternatively just keep your watch running the whole practice and have one giant total at end.

Hitting the pause button at the end of each rep has its drawbacks though. When swimming alone, I occasionally liked to be able to hit the lap button mid rep if I was changing paces. For example, if I was doing a 300 build where each 100 was going to get progressively faster, I liked being able to hit the lap button mid flip turn and continue swimming to track if I was getting faster each lap.

The only other flaw that I found was the size of the buttons. Since the pause button is on the side of the watch instead of on top like the 910, it is awkward to find and hit at the precise end of the set.

Nevertheless, throughout masters class, it accurately kept track of each lap and even picked up on when I switched between strokes. Since, My stroke sometimes goes wide when I sprint, it occasionally read that I was doing butterfly when in fact I was doing free, but those occurrences were few and far between.

In addition to its discreet size and look, what really sets the Swim apart from the 910 and the like was its ability to switch to drill mode. Unlike other watches, you can switch to a timer like setting when doing drills where it will not count laps by simply record time. Once done with the drill or kick set or lap, simply hit the stop button and plug in the yardage manually. For data geeks who crave accurate readings and totals, this is a dream come true.

After the swim, your data will automatically upload to your computer via an ANT+ USB dongle that comes with the watch. Since Garmin and Trainingpeaks have partnered, the swim will also be pushed to your TP account for your data analysis pleasure.

Overall, the Garmin Swim which retails around $150 USD is a great deal for the triathlete or swimmer who values data as well as their vanity.

The Garmin Swim at Amazon