This issue includes an article on freestyle stroke technique (mechanics). It talks about Bill Boomer, who invented many of the techniques you may hear about or see these days, including the Total Immersion method. I think this is very applicable to swimming in a triathlon.

By the way, I will soon be putting back issues of the TSC Newsletter on the website, www.triswimcoach.com. If you are looking for any specific information in the mean time, email me at [email protected] and I will do my best to help you out.

In 1985 DR Bill Boomer coach to the university of Rochester swimming team in upstate New York addressed a coaches’ clinic and posted the question of “How can we teach people to swim at a given speed with less effort?”. Now you can imagine the reaction of the attending coaches, having just sat through speaker after speaker lecturing about how they had “Built their own swimmers’ endurance” by throwing enough hard work at them, that their bodies had no choice but to build endurance. Boomer’s answer was to “Reshape the swimming vessel” in order to achieve higher velocities in the water.

Since that first lecture, DR Boomer has lectured world wide, and has taught stroke theory and technique to some of the fastest swimmers in the world. These swimmers include Dara Torres, Jenny Thomson, Pablo Moralas, and Lenny Krayzelberg.

Swim coaches in the US have not been slow to realise the real potential of Boomer’s ideas and have adapted their own programmes accordingly. These coaches include Milt Nelms, Richard Quick, Terry Laughlin, and Gennady Touretsky.

In 1997 and again in 1999, DR Boomer Lectured here in the UK, but it seems his words have fallen on deaf ears. Swimming is associated with a powerful work ethic. Coaches’ conversations generally center on how hard their swimmers are working, or how much they are doing in the pool. In over twenty years of swim coaching I have heard very few coaches talk about the new skills their swimmers have learnt. It has been my observation that swim training as most coaches practice it does not produce the kind of results that it could and should.

The problem is not that the people involved (swimmers and coaches) are not working hard enough. It is that they are focussing on the wrong things. The result is that the majority of British swimmers (at all levels) will never reach their full swim potential.

In just one hour, a swim coach can do more to improve their swimmers’ efficiency and economy of movement, by improving technique, than with a month of training for fitness and power.

Many coaches who do focus on technique, actually focus on the wrong things. These coaches tend to emphasise how to create propulsion (how their swimmers sweep the water) instead of teaching their swimmers how to avoid wave and form drag, and how to create more power through core body alignment and by learning to “swim the line”.

The idea of swimming the line treats the body as a very stable platform, from which all four swim strokes emanate. This line follows the natural line of the spine that extends through the body from the toes to the top of the head. The body remains straight and horizontal for as much of the stroke as possible. This contradicts common thinking, where the body is treated as a speed boat, where the front end rides higher in the water. In reality this orientation pushes the legs and hips lower in the water, creating more drag. The body moves more easily through water if it stays in a single line.
Faster swimming has more to do with body position than how much training a swimmer undertakes.

The long axis strokes, front crawl and backstroke, are considered long because the strokes rotate around the line created by the spine, with propulsion being provided by the powerful muscles of the torso. If the torso (or core) now provides the power for propulsion, what do the arms contribute if they are not primarily responsible for pulling the body through the water?

Contrary to the popular paradigm that prevails in swimming thought, the hands best employed not by sculling or pulling to provide propulsion, instead they act as an anchor to hold water! This is similar to climbing a ladder, when you ascend you do not pull the ladder down past you body, you push your body over your arms.

When the body is balanced and rotated powerfully around the line via the muscles of the torso or core, the arms naturally move into the recovery of the stroke, reducing stress and strain in the shoulders.

The key to staying in line starts with the head position. Popular thinking teach swimmers to hold the head in a high popped up position in the water, looking straight ahead. Swimming the line requires that you put you head lower in the water, to form a straight line from the top of the head, through the neck and spine and extended down between the legs. This puts the waterline midway through the head, with the eyes looking at the pool bottom for freestyle, or at the ceiling for backstroke. We call this axis “The line” and propulsion in the long axis strokes comes from rotation about this line. Minimising drag is achieved by keeping the line straight and horizontal, and keeping the body close to the line throughout the stroke.

As a swimmer, learning to swim the line is not only important, but it is nonnegotiable keystone of fast efficient swimming that influences every part of all four strokes.

Training Tip #7: Work your Weaknesses
In the sport of triathlon, most coaches agree that you should spend the most time working on your weakest of the three sports. For many of you this will be swimming! Within swimming, the same concept applies. Spend the most time working on the weakest part of your stroke. If balancing on your side is an issue, do some kicking drills on your side. If moving your head is a problem, focus on head position most of the time.

Whatever it is, you will gain the most by spending your pool time improving on that weakness.

If you are looking for a coach in the U.S., we have many listed in our directory. Go to the link below to find one in your area.
https://www.triswimcoach.com/find-a-coach/ 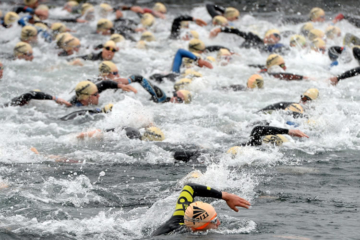 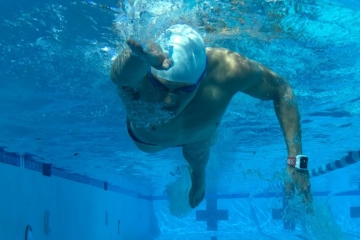