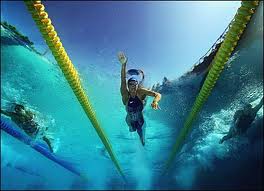 But this question needs a little more detail. Freestyle stroke technique for what? Swimming a 50 meter free in under 21 seconds? Swimming the 1500m? Doing a 10k in the ocean? Or swimming 1k at the beginning of a triathlon?

Not many seem to be distinguishing the differences here. Let’s look at 2 Olympians here and compare differences:

Sun Yang won the gold medal in the 1500m event and shattered the world record. Here’s a good look at his stroke underwater:

This is about as smooth a stroke as you can get.

Now, let’s look at one of the fastest 50m freestylers of all time, Alain Bernard in one of his races:

Not as easy to see, but can you tell a big difference in their strokes?

Bernard seems to be doing the “S-Curve”, while Yang is executing the high elbow catch perfectly.

Should one of these guys adapt the other’s stroke? Of course not!

So as a triathlete, which makes more sense- to learn from the distance free champion or the sprint free champion?

But what about the scientific evidence that came out recently saying that they can prove that the deep catch is the faster technique? I don’t doubt that, but how sustainable is it? 50 meters? 100 meters? Maybe 200? And then you look at the different goals triathletes have vs pool swimmers. Energy conservation is even more important than speed. So even if you could apply the “fastest stroke” in your swim leg, it could come at a cost of being exhausted before you even get on the bike!

Just as I pointed out in my 2004 article on Olympic vs Triathlon swimming, it’s good to learn from these guys but try not to get caught up in the “debate” about which stroke is best. That will depend on your event and your goals.