The best article I’ve seen yet on the Olympic triathlon. Penalties are such a pain! But this time around was interesting, because the pre-race favorites actually pulled through!

Now, if we could just see some race splits for the tri geeks out there! 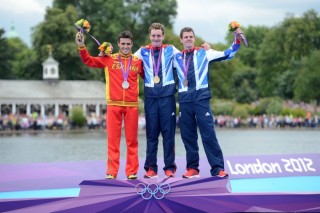 Alistair Brownlee of Great Britain took the lead in the Olympic triathlon before stepping off the blue carpet of T2 and never relinquished, winning the gold medal in front of his home crowd. The defending world champion commanded the race from the front, immediately setting a blistering pace and forcing every other racer to react. Only Javier Gomez (ESP) and Jonathan Brownlee (GBR) were up to the test. They quickly separated from the rest of the field and were left to fight for the medals amongst themselves.

Jonathan Brownlee, Alistair’s younger brother, was forced to serve a 15 second penalty because of a foul committed in T1, and he waited until the later stages of the race to take his punishment. Gomez valiantly hung on to Alistair Brownlee as long as he could and earned the silver while Jonathan won bronze. Both Americans struggled, with Hunter Kemper finishing 14th in his fourth Olympic Games while Manny Huerta crossed in 51st.

The race through Hyde Park started with a blistering swim. Steffan Justus of Germany said, “They started the swim hard after about 300. There were a lot of little gaps.” The German was one of many left behind by the pace set by Slovakian Richard Varga. Many of the dangerous runners lost time, but the three big favorites—Gomez and the Brownlees—all made the small breakaway group.

They mounted the bikes and Alistair Brownlee couldn’t believe his luck. The riders in the group were all cooperating and sharing the work required to keep a tough pace, which worked perfectly for their strategy. “It’s quite obvious really, we just want to go as hard as we can in all the events,” said Alistair after the race.

Jonathan, however, had a problem. He stepped on the mount line and picked up a 15-second penalty he would have to serve during the run. The younger Brownlee said, “At first when I saw the board, I saw #31, I thought ‘Alistair’s got a penalty, what an idiot,’ then I looked around and saw I’m 31 and thought, ‘oh dear.’” ITU rules give the racer the option to select the lap they serve the penalty.

The pair spoke to each other about the penalty on the bike. “I was thinking about what I could possibly do to alleviate it, tactical wise,” said Alistair. “We knew about it and I was thinking, ‘If I can go off as hard as I can and only take Jonny with me, then maybe he can run back through the field.’”

This small breakaway group stayed out front for the first two of seven laps around London. “We were working really smoothly together, unfortunately the group behind us of about 15 guys was working really good together and managed to catch up, but I think you can do a lot of damage in the first two laps, making the guys behind you chase,” said the elder Brownlee. In that chase group was Hunter Kemper of the United States. The Olympic veteran had positioned himself to run for a high place.

Javier Gomez was a bit anxious waiting for the run, saying after the race that he “had a bit of tension to not make mistakes.” Once the big group swallowed the leaders, Stuart Hayes of Great Britain took on most of the work. He was selected ahead of higher-ranked athletes specifically to shepherd the Brownlees through the bike as a domestique, sacrificing his own race to help them. Knowing he would spend most of his day breaking the wind, Hayes raced in an aero helmet despite the draft-legal format. “Stuey kept the pace really high, he covered most of the attacks,” said Alistair.

The roads were dry, so the men faced more predictable conditions than the women did three days earlier. Two-time medalist Simon Whitfield was the only contender to suffer a crash. “[I] hit the speed bump just as I went to put my shoe on, I’m not quite sure what happened, but I ended up crowd surfing,” said the Beijing silver medalist. He was forced to drop out and received stitches in his foot after the race.

Manny Huerta, the second American in the field, was left behind during the swim. He rode with the chasing group, but lost substantial time to the contenders at the front of the race.

Hayes kept the pace up for the first five laps, and it started to slow a bit on the final laps.

The Brownlee brothers are infamous for sprinting out of T2 and putting the field under immediate pressure, so every athlete started to jockey for position coming in to the final transition. Hayes stayed at the front and protected the Brownlees. Kemper slipped to the rear of this group leading in to T2, however, and lost six seconds before exiting on to the run. Although this sounds like a trivial amount of time, it’s equal to roughly 30m at the pace set by Brownlee. “I was way far back and that was it,” Kemper reflected after the race. Huerta exited T2 three minutes behind.

Defending Olympic champion Jan Frodeno (GER) said, “These guys have been so good in the last couple years, they would have to make a mistake for us to come close,” and he was proved right immediately after the run started. As usual, Alistair Brownlee led out of T2 and only his brother and Gomez responded. Within just a kilometer, the rest of the field was out of sight.

The trio ripped through the first lap at 28:00 10K pace, and Alistair was impressed that Gomez had kept up. “It became very clear after the first lap, that [Gomez] was in great shape and it was going to be a tough race,” said Alistair after the race.

Although he was running stride for stride with the others, Jonathan Brownlee was effectively in a 15-second hole, since he committed the mount-line foul leaving T1 and still had to serve this penalty. When he got off the bike the British coaches told Brownlee to serve his penalty on the first lap—the box is at the end of the lap—but by the time he reached it, Brownlee decided to keep running. Kemper was 45 seconds behind the leaders at the 2.5K mark of the run.

“We were in the group of three then so I thought, ‘there’s no point in taking it now, we’re getting dragged away [from the field],’” said Brownlee. “Then on the second lap we were still in a group of three so there was no point in taking it now, then we got to the third lap and I was a bit tired and I thought I had better take it now rather than taking it with 200m to go.” Gomez had opened a small gap over Jonathan Brownlee before the young Brit stepped off the course into the penalty box.

British Triathlon performance manager Malcolm Brown raved about the decision after the race. “[Jonathan’s] race was not only fantastic in terms of effort, but intelligence as well,” said Brown. “He clearly made the right decision to take it later rather than earlier. That’s what the Brownlees are, they’re intelligent. They can make judgment calls and they’re great racers. They showed that today.”

He sprang out 15 seconds later and set off in pursuit of Gomez. The distance shrunk for the next kilometer or so, but then Jonathan appeared to run out of steam. The French duo of David Hauss and Laurent Vidal started to close on him.

Alistair finally put a few seconds into Gomez in the third lap and continued to extend his lead in the fourth and final go-around. He entered the finishing stretch clear of Gomez, wrapped himself in the flag and crossing the line. He crossed with a 10K split of 29:07, and the race organizer promises the distance is legitimate; the same person who certified the marathon course measured it.

Gomez crossed next for silver and Jonathan Brownlee completed the podium.

The big question was whether or not the penalty had affected the outcome, but Jonathan quickly answered that question. “It definitely would have been closer, but I don’t think I would have beaten him,” said Brownlee. “He had already dropped me in the third lap. That’s when I stopped, when he started to pull away. Javier had an absolutely incredible run today, his best ever, so I don’t think it would have changed the result, but I guess we’ll never know.” He was thrilled to take the bronze.

After the finish, Jonathan walked around for several minutes, then dropped to the ground after standing in a hot room. “I collapsed about 10 minutes after finishing, but that’s part of triathlon. It was hotter out there than we all thought. I collapsed got taken to the medical tent and was covered with ice. But I’m alright now,” he said.

Unfortunately it was a tough day for the American men. Although Kemper competed at the front most of the race, he was disappointed with his 14th place finish. “I wasn’t happy with the result, that’s for sure,” he said. Huerta was also dissatisfied with his result and spent significant time in the medical tent following the race.

Check back for more analysis and photos from London.