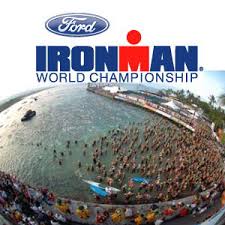 What is your Kona?

We are only 3 days away from the cannon going off and start of the Ironman World Championships in Kona, Hawaii. For me this is the Superbowl of the year. I find all the performances from the top pro finisher to the last person across the finish line inspiring. It is my dream to go there one day and tread the line with the best in the world.

However, I am very glad I am not competing this year.

This statement may take you aback if you have been following Tri Swim Coach for a while.

People ask me: “If it is your dream, why not achieve it and go? Since you have the talent to and skill to get there, put in the work and seize the moment.”

In triathlon though, you have to be patient. For this reason, I found this interview from Mirinda Carfrae, who is one of my heroes and whom I have a huge crush on (if you are reading this Rinny, “call me, maybe?”), particularly  motivating and reassuring.

Your career and fitness cannot be judged by a single workout nor can it be created by one. Instead it is a built up with YEARS of training.

The athletes who are going to be finishing first on Saturday have been preparing for the majority of their adult lives for this event. That is a lot of hours to put into an event; but that is why they are so good–because they did put in those hours.

Like Carfrae says though, keep on pushing because doing that workout regardless of your finishing times or your missed splits will come back to help you in the future.

When you do encounter these days step back and gaze into the mental horizon. There in the distance is your goal. Keep on walking/swimming/biking/running, and eventually you will get there.

Mirinda Carfrae isn’t your typical triathlete. She was introduced to the sport at 18, started racing elite at the junior level, and admits she had absolutely no idea what she was doing.

“I was thrown in the deep end,” she said. “There were a lot of races where I was handily beaten…I probably should not have been racing pro.”

She wasn’t just losing though; she was losing to some of the world’s best triathletes…people like Barb Lindquist. It was sink or swim for Carfrae, and now, with an Ironman World Championship win in 2010, two second place finishes and 15 Ironman 70.3 wins under her belt, it’s evident she swam.

“When you put yourself in among the best in the world,” she said, “you learn pretty quickly.”

“Quickly” however, is relative, and learning quickly involved a lot of long hours and hard work. Here, she talks about what it took to not only survive, but to rise to the top—and stay there.

Whether you’re thrown in with the sharks, or trying to progress from age-grouper to pro, the key to success, Carfrae says, is persistence.

“It doesn’t happen overnight,” she said. “But if you want it bad enough, you can make it happen.”

Although she had a strong run, Carfrae had a lot of work to do on the swim and bike. “I was hopeless in the swim.” she laughed.

So, like any committed triathlete, she started with the basics and focused on technique. Thirteen years later she still tries to get in the pool almost every day.

“If you’re a great swimmer, you probably don’t have to be in the pool six times a week,” she said. “For me, it’s important…to get that feel for the water.”

Early on, she thought 15- to 18-hour training weeks were a lot. Now she puts in closer to 35 hours during peak season. In addition to six sessions in the pool, she rides five days a week for a total of about 370 miles, or 20 hours of cycling. She also runs six days a week, with one of those days including a double—one run in the morning and one in the afternoon.

With all those hours, she says “it’s important to keep your eye on the end goal but to have small goals along the way.”

It’s those goals that keep her going during long sessions.

“Sometimes you just feel like it’s groundhog day,” she said, only half joking. On those particular training days, she likes to tap into memories of successful races and the emotions that result from a personal best. That memory bank is the key to her persistence and commitment.

“Kona is a massive motivator for me. That race is one that I’m thinking about when I’m doing my super hard sessions,” she says. “Accomplishing things you never really believed you were able to accomplish…it makes it all worth it.”

Of course memories alone can’t power you through a long ride. So, what does Carfrae rely on for sustenance?

“Eggs. I have them every day”, she said. “They’re really good and easy to digest.”

Other items she always keeps on hand include chocolate, bread, yogurt and chocolate milk.

“I graze throughout the day because it’s hard to eat big meals between big training sessions,” she said. “This morning I had a banana and cookie as I headed out the door.”

She usually eats gels during workouts and makes sure to have a good dinner at the end of the day.

For as hard as she works in season, it’s equally important to take time off at the end of the year. Carfrae takes two weeks completely off, then takes two weeks to do whatever she feels like before starting to build the miles back up.

“You want to do a super good base block and build that up over a couple of months before you put the quality on,” she said.

She also emphasizes the importance of strength training in the offseason: “If you have any niggles you have to make sure you get those addressed.”

By March, Carfrae is back to racing (she usually tries to do one 70.3 that month) and back to dreaming about Kona. It’s that kind of focus that keeps her on top of the game. And it’s the same thing she would tell aspiring triathletes.

“Never lose sight of your goal.”

With three sports, triathlon is tough and there are a lot of necessary steps that you just can’t rush. But, as Carfrae proves year after year, a little persistence and a lot of hard work can get you there.